Zigby is a fun and deceptively simple turn-based strategy game that you play against a virtual opponent. It’s based on a “Capture the Flag” concept. Play a few games to understand why. Each game takes just minutes to play except for the larger boards available for tablets which can provide quite a challenge. 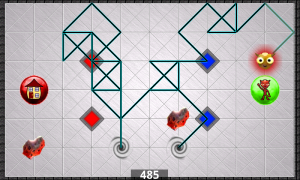 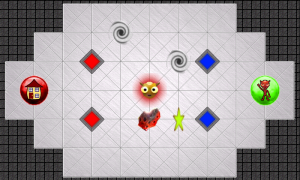 Zigby is a fun-loving alien who wants to visit his friend, but his older brother interferes with the ship, so Zigby and his brother take turns controlling it. Will Zigby outsmart his brother and make it to his friend ? Or will the brother prevail and get Zigby grounded ?

The playing board is made up of a grid of points. Each turn, you move Zigby one square at a time, but can extend your turn by “bouncing” off grid points that have been used before. Grid points may contain a meteor, star or blackhole that provide further bonuses or penalties. Depending on the setup of the board, you may choose an aggressive strategy to get to your destination, or a defensive strategy to block off routes back home. As play progresses, the game becomes more interesting since Zigby can chain moves and take advantage of objects on the game board to move a dozen or more spaces. 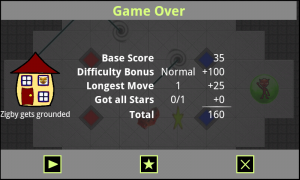 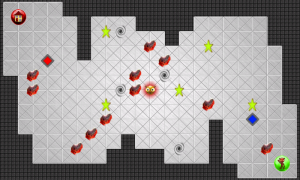 The game contains an embedded help system so you can learn the game as you play. It takes only a minute or two to learn all of the rules. The game starts up with a basic rectangular map, but many maps are available. Some maps will only play on larger devices, so the selection of maps on a tablet provides a range of simple to complex game boards. You’ll quickly see that there are a large number of combinations between the maps and the randomness of the boards.

Find Zigby on the Android Marketplace or Amazon Appstore. Two versions are available:

Zigby Free: This is the ad-supported trial version. Search for “Zigby” or go to Android Market or Amazon Appstore.

Zigby: This version contains no ads and enables all the features. Search for “Zigby” or go to Android Market or Amazon Appstore

By upgrading to the paid version, you get the following benefits:

Theme SWIFT by Satish Gandham, a product of SwiftThemes.Com Copyright © 2010 AllUCanApp Software | Entries (RSS) and Comments (RSS) powered by WordPress [Back to top ↑ ]